Some say there is no such thing as “good or bad luck”….maybe so, maybe not.

Do you believe the Southern lore based around  eating black-eyed peas and greens on New Years Day? That doing so will bring you good luck all year?  Is this a tradition to which you adhere?

Other than us all needing as much good luck as we can find, I truly love this humble pea…dried or frozen in the winter, fresh in the summer. See this colander of peas? My good friend, Stephanie gave me a bag of fresh, frozen black-eyed peas from her Mother’s garden in West Tennessee as a holiday gift and I cannot think of many things better.

I started my pot of soup early on New Years Day…letting it simmer with ham pieces, carrots and zucchini. This year I made more of a traditional soup with tomatoes and broth. I tossed in a few handfuls of fresh spinach right at the end.  This is bright colorful recipe.  2017 has been harsh politically, and the world in general could use some “good luck vibes”.  So eat your peas and stir up some good luck….it’s never too late! 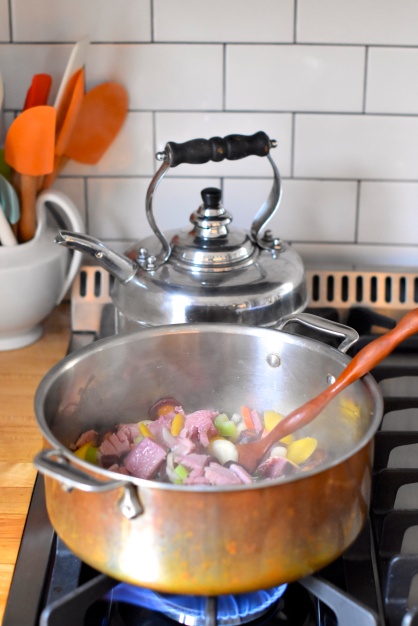 Happy Mother’s Day to all the hard-working, loving Mamas I know and treasure.
Vegetable bin clean-out. Don’t waste it...grill it. Perfect for pasta sauces and soups.
Thanks @ediblenash for including my blog recipe from Food on Fifth in your beautiful May-June Issue.
Spring Salad topped with Canned Alaska Wild Pink Salmon
Good morning iced coffee..
Just another day on a video shoot here in beautiful downtown Nashville!
Little Studio...languishing...waiting for my return...soon...soon
Good morning my beautiful Trumpet Vine.
First “swoonable” Zinnias from my little garden.
After the grilling...styling...eating.
Nashville 8:30am what I was doing....what were you doing?
Warm cobbler....cold ice cream!
Happy Day to see my work on Cracker Barrel’s blog site...check it out for recipe ideas...lots of yum!
Just in time...Raspberry Flavor Sugar Shortbread Cookies...Spring is here!
Sunday morning just picked...la petite cafe garden
Finally...we have a “run like hell” or “duck and cover” tornado emergency bag just in case...it’s small but mighty with cash, cards, chargers, pills and panties (for both of us!)🌪⛈💨🌪not going to not be prepared this spring. Stay safe.
One Basic Irish Soda Bread...make it savory or sweet...on my blog link in profile...quick, easy and timely
Good morning Nashville
Hello Beautiful...so happy to see you!
Loading Comments...
Comment
×
%d bloggers like this: