Warm, cozy blanket-comfort food to me is toasted bread with a smear of butter melted down into the nooks and crannies with a spoonful of homemade marmalade.

A large bowl of citrus, Blood Oranges, Tangelos and Red Grapefruit, about to go south quickly, was sitting on my kitchen counter this past week. Most was left over from my last photo shoot which now seems ages ago.  During “normal life” I cannot bear wasting food, so the peeling and slicing began. I find the making of marmalade as comforting as the eating of it.

Beautiful day, warm and breezy, windows open….Tulip and Honeysuckle blooms catching the breeze by the kitchen door. A good day for marmalade.

After rescuing all the good rind and flesh from each orange and grapefruit, I squeezed all of the leftover pieces for the juice adding it to the bowl.

I learned a few years ago that it is not necessary to be a totally crazy person when peeling the rind from the citrus to make sure none of the pith is left. My marmalade is still very tasty and not bitter with a little pith still attached. The slow simmer in the sugar-liquid mixture takes care of it.

Hot, thick, wonderful marmalade ready to be jarred and eaten.

What are you making to comfort yourself while being sequestered at home? I bet something cozy and delicious. Dishes that make you feel wrapped in a soft blanket? I hope so. Stay home, stay safe. This too will pass. 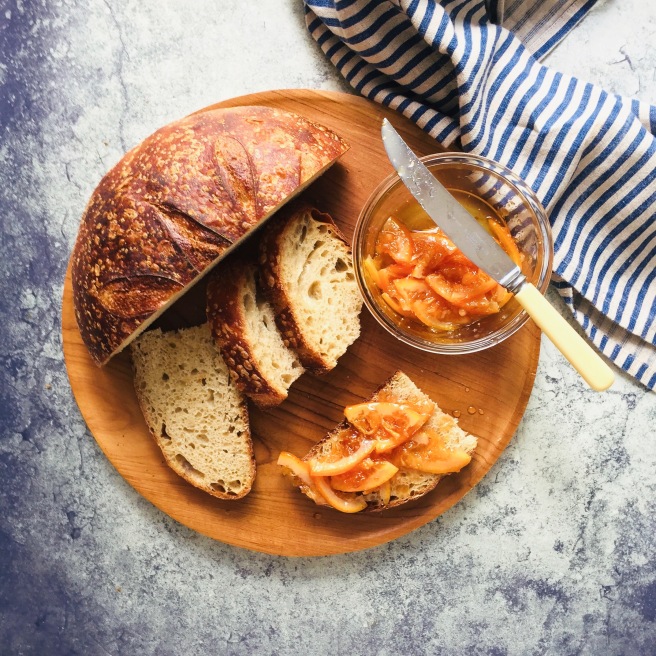 It’s great to have “friends-with-figs” I always say. Friends who go away on vacation leaving a tree laden with figs and share are even better. Having a friend who bakes great bread is “icing on the cake”.

Finishing a photo shoot and having lots of fresh oranges left over is another good thing.

Yes, it is hot work. The kitchen gets all steamy, as do I, but as I’m stirring I think of my Grandmother Kenny Mae, who canned all summer with hardly a window fan to cool her down and she managed without complaint. She loved the process more than the discomfort I suppose. Jars of jam and preserves made in the summer were all the more tasty during the winter months.

Random glass jars with new lids and rings gathered from my stash. Everything sterilized…jars filled…lids on. This marmalade can be refrigerated or even frozen. I can a few jars and give most away to friends who don’t have figs, some who do, some who just love marmalade like I do, and I save a few jars for later. This is such as easy recipe that I make it often throughout the year. 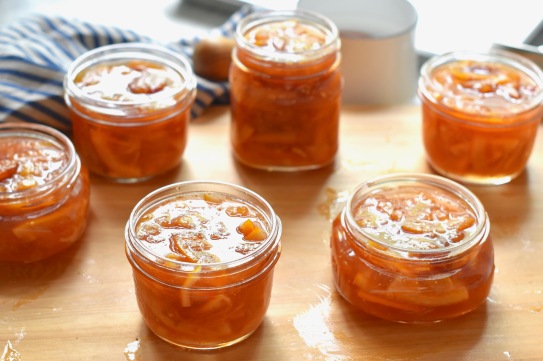 With so much citric acid I also oven-canned some jars. For a how-to on this method check out an earlier marmalade post here. 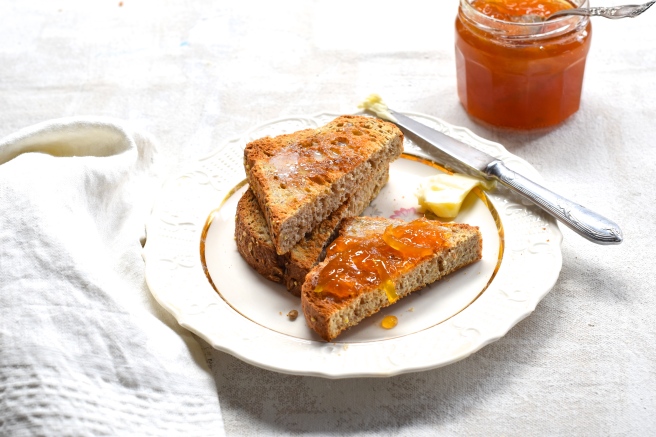 “I came all the way in a lifeboat, and ate marmalade. Bears like marmalade.” quote:  Paddington Bear.

I, too, like marmalade. And it’s such a pretty word as well. It sounds like it tastes. I’ve posted other marmalade recipes...”Maple-Kumquat Marmalade”…“Meyer Lemon Marmalade” and my most popular “Buddha’s Hand Good Luck Marmalade”. They are all tasty and I do think Paddington might like them very much.  But…..

…this week I chose the imposingly large Pomelo citrus for making marmalade. You may have seen them in the grocery. They look like a giant grapefruit, but are about the size of your head…really, truly…unless you have a very small head. They aren’t hard to find in January and February in most supermarkets or import groceries. Pomelos are tangy like a lemon mixed with the sweetness of an orange. A complex tasting citrus. Full of Vitamin C they can be juiced like most citrus of course. These Pomelos were so large I only needed two for 4 pints of marmalade! If you want to know a bit more about the Pomelo click here. 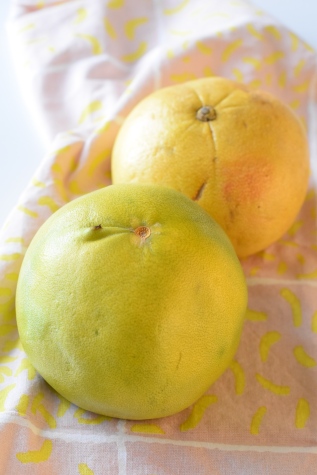 The pith is very thick and when cut away leaves a round fruit about the size of a large grapefruit…they are from the same family of citrus by the way.

Rind is cut away and into thin strips. Pith is removed. Fruit is then cut into sections. Scraps and seeds are gathered into a cheesecloth bundle to flavor the marmalade. 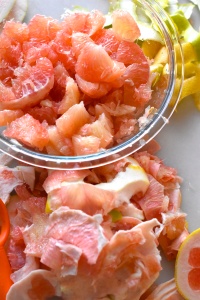 Cooked down for a few hours with sugar in the final stage, then poured into clean, sterilized glass jars with lids. The recipe is easy and you can substitute Grapefruits if you like. 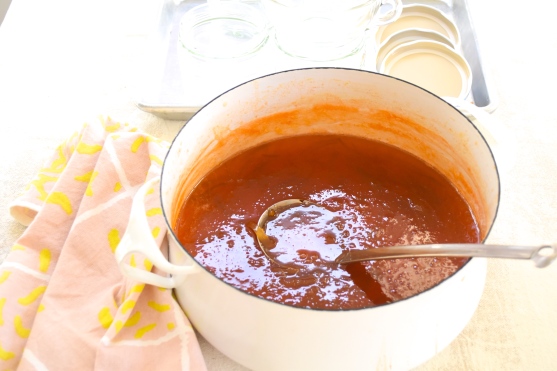 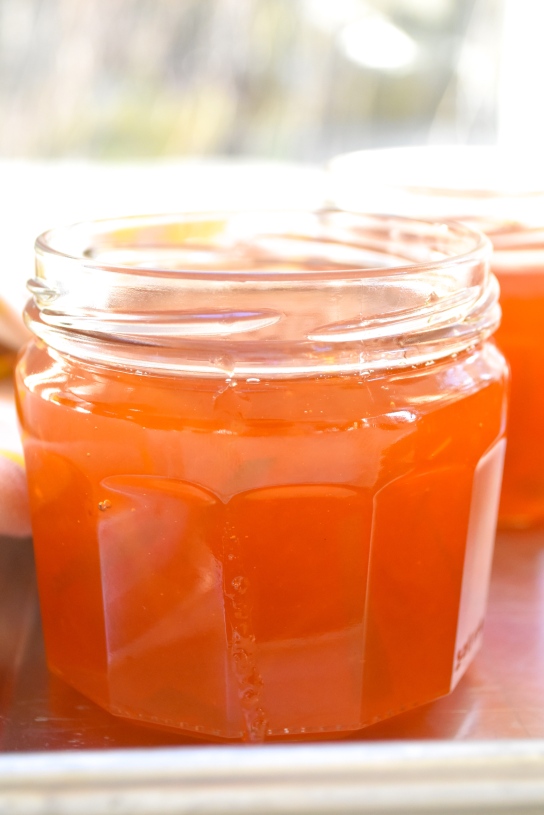 A new-old trick I recently learned about is to seal jars in a low temp oven! Works like a charm and no hot water bath. This doesn’t work for all canning, but is particularly good for high pectin fruits. 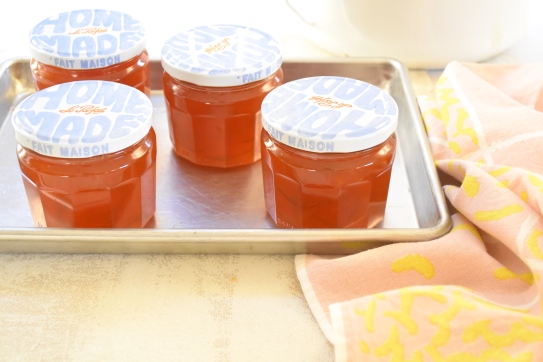 Thick sliced whole grain bread toasted with a slather of softened butter, topped with “Pomelo Marmalade”. Perfect for me and perfect for Paddington!